I would like to introduce to you our Interim Rector.  She is Reverend Dr. Linda M. Kapurch.  Currently Pastor Linda is the interim rector at Christ Church West River Annapolis.  She began her ministry with us on Sunday, September 15, 2019 at a Joint Service in Smith Hall.

A native New Englander (Worcester, Massachusetts, to be exact) the Rev. Dr. Linda M. Kapurch retains a slight but unmistakable accent and a great fondness for the National Seashore of Cape Cod.  A graduate of Notre Dame Academy in Worcester, she holds a bachelor's degree in psychology, with a minor in German, from the College of New Rochelle, New York, and earned a master's degree in counseling and personal services at the State University of New York, Albany. She is a graduate of the Shalem Institute for Spiritual Formation and the Virginia Theological Seminary, cum laude. In 2016 she received her Doctor of Ministry from Wesley Theological Seminary in Washington, D.C., with a focus on "Life Together: Spirituality for Transforming Community."

Raised in the Roman Catholic Church, Linda discovered the Episcopal Church after college, and became active in the lay leadership of her sponsoring Parish, St. George’s, in Arlington, VA, prior to Ordination.  Prior to moving to the Diocese of Maryland, (to become the Interim Rector at Christ Church, West River) Linda served for over ten years in the Diocese of Pennsylvania: as Associate Rector (at the Church of the Advent in Kennett Square, and at St. Matthew's Church in Maple Glen) and as Interim Rector/Priest-in-Charge (at Trinity, King of Prussia, and Ascension, in Parkesburg.)  In her Ministry in PA she has followed Our Lord through all of the great mysteries of our faith:  from His Advent through His Ascension.  She loves just being a Priest!

During her time in Pennsylvania, she also branched out into her local communities in numerous ways. Combining her love of the outdoors and sports, she became a part-time Chaplain at the Greater Brandywine YMCA, traveling to the various branches in the region.  When the Dow-DuPont merger hit the Kennett Square area hard with multiple lay-offs, she pitched in to design and lead a “Job Loss Spiritual Support” program which became both ecumenical and interfaith.

Just for fun, Linda loves to travel and study foreign languages.  She was able (in 2006 and ’07) to go to Lithuania, where both sets of grandparents set sail for Ellis Island in the early 1900s—a truly memorable and moving experience for her.  In summer of 2019, Linda returned to the German school where she had been a Fulbright Scholar, teaching German students (American) English, and where she was instrumental in launching an exchange program which ran for fifteen years.  The arts are another area of great delight for her, and she was the Episcopal  summer chaplain at The Chautauqua Institute(in 2016.) While a member of St. George’s in Arlington, she was a volunteer at the National Cathedral in Washington, D.C.  Most importantly of all, she is the unabashedly proud “soccer aunt” for her spectacular nephew and nieces, cheering them on in school, in the band, and on the field (Roll Tide, Roll!) 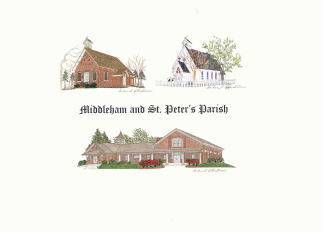 ALL SERVICES CANCELLED DIOCESE WILL REASSESS 05-16-20

MSP WORSHIP SPACES, ADMIN OFFICES & PARISH HALL CLOSED TO EVERYONE. REASSESSMENT BY MD DIOCESE BY MAY 16, 2020. THANK YOU, PLEASE...