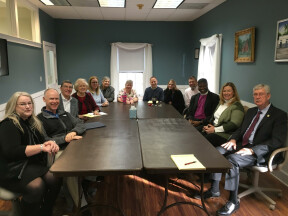 The Vestry is the elected board of members who works with the Rector to lead the congregation in its ministry of service to the people of Middleham and St. Peters. Vestry members serve for a three-year term and are elected each February at the Annual Meeting. According to the Canons of the Episcopal Church, the Vestry has primary responsibilities for being the legal agents of the parish, managing the finances of the parish, and calling a rector, though the Vestry also works to develop and implement the vision of the parish.

A little information about the vestry members:

Sally Arbuthnot: Sally has attended Middleham and St. Peter’s for over 20 years and was elected to the vestry in 2018. She was editor of The Connector for 15 years and served on the Endowment Board for seven years. Currently she is a member of the Haiti School Nurse Project team, secretary of the Episcopal Church Women, and helps with various parish events. A talented organist, she plays for the Sunday services at St. Peter’s on alternate weeks. Sally and her husband David live in Lusby. What keeps Sally at Middleham and St. Peter’s is the wonderful spirit of welcome and giving in this parish family and the active commitment of clergy and parishioners to help others in our community and beyond. By being involved in parish activities here you can educate yourself and help make a difference in the lives of others who are less fortunate.

Tom Briggs: Tom has attended Middleham and St. Peter's since 2004 when he and Wendy transferred here from Trinity Episcopal Church in St. Mary’s City. Tom served on the vestry from 2006 – 2008 and now is running for another term. They attend the Middle Service most of the time but are often at one of the chapel services when their son Jack is serving as an acolyte. Tom is a lay chalicist and has served at all three of our worship spaces. Tom and Wendy live in Lusby. What keeps Tom at MSP would be equal parts of being part of helping MSP per-form its outreach, part agreeing with the Episcopal Church worldview, and part loving the people we see on a regular basis.

Laura Carpenter: Laura, daughter of Jim and Dale Yoe, was raised in Middleham and St. Peter's and attends the Middle service most of the time, but frequently she can be found at any of the three Sunday services. Laura was first elected to the vestry in 2016. Currently she is a candidate for the deaconate. She and Bryan live in Leonardtown. Their daughter Emily is an acolyte, and their son Ethan served as an acolyte until he went to college. What keeps Laura at Middleham and St. Peter's is her connections to the parish community through family and friends. She enjoys the inclusive nature of worship and its important ministries such as parish health and Heart FELT backpacks. Her favorite thing about the middle service is watching the young children grow up in the church as well as the music selections.

Andy Connolly: Andy has attended Middleham and St. Peter's for about 15 (?) years and has been a member since he transferred his membership from St. James in Hyde Park, New York about 8 years ago. In 2010, Andy was elected to his first of two terms on the vestry, and now he serves as Assistant Treasurer. Andy and Sue live in Leonardtown and attend both Middleham and the Middle service about equally. Their son Zach is a current acolyte, and their daughters both served as acolytes before they went away to college.

Colleen Davies:  Colleen has been a member of Middleham and St. Peter’s for about 25 years and was received into the Episcopal Church from the Lutheran Church in 2007.  She is now serving in her second term as a vestry member.  Colleen and Chris live in Lusby and attend the Middle Service primarily.  Children Connor and Calvin were acolytes before high school graduation.  What keeps Colleen at Middleham and St. Peter’s is the sense of community and family.  Also, she loves the history of the buildings and the campus.

Anne Gross: Anne is a life-long Episcopalian and has been a member of Middleham and St. Peter's for about 27 years since she transferred her membership from St. Paul’s Cathedral in Wisconsin. Anne has served as Registrar for 12 years and was Treasurer and Senior Warden previously. Anne is a Lay Chalicist. She is a member of the Daughters of the King and president of the Episcopal Church Women. Anne and Dan live in Solomons. Anne attends all three of the Sunday services but considers St. Peter’s her home base. Anne is one of four volunteers in the parish office who produce bulletins and perform the administrative functions of the parish. What keeps Anne at Middleham and St. Peter's is the love and fellowship she feels from fellow parishioners and the criticality of our ministries.

Franz Kury: Franz has attended Middleham and St. Peter's for around 11 years. He and Jess attend the Middle service most of the time but frequently are at a chapel service because their two daughters, Avery and Lainey, are acolytes. Their son Adam was an acolyte also until he went off to college. Franz and Jess were received into the Episcopal Church in 2016. They live in Lusby. What keeps Franz at Middleham and St. Peter's is the services and the genuine and welcoming community.

Anne Hayes: Anne was raised in Middleham and St. Peter's. She was elected to the vestry in 2015 and currently is serving a second term, but Anne also served as a youth member of the vestry from 2003 – 2005. Lochlan and Kaileigh, the oldest of her four children, are acolytes, and Anne is our Acolyte Leader. Anne and Ricky live in Lusby and attend the Early and Middle services about equally – but also attends Middleham, especially when her children serve as acolytes there. What keeps Anne at the church is what she calls progressive traditionalism. She loves the fact that we are still very rooted in traditions and the basic feel of the services are what she has always known, but we have the understanding that times have changed and that we need to move with them and embrace new thoughts and ideas, while still standing true to our roots.

Joan Shisler: Joan has been a member of Middleham and St. Peter's for about 37 years and has served as Senior Warden since 2006. She and Mike were married at Middleham Chapel and raised their four children in this church. Their oldest daughter, Sara, is a priest currently serving in Hawaii. Joan and Mike live in St. Leonard and attend Middleham Chapel most of the time. What keeps Joan at Middleham and St. Peter's her appreciation that her spiritual needs are met through worship and that our Eucharist is considered God's table for all. She is grateful for the exceptional ministries we support at MSP and how we provide for our congregation and the community at large. Most importantly she believes that we are truly a welcoming parish where everyone is accepted, no exceptions, and we show this on a daily basis.

Mark Tonacci: Mark has been a member of Middleham and St. Peter's for about 17 years since he transferred his membership from Christ Church, Port Republic. He and Lucy attend St. Peter’s most of the time. Their two children served as acolytes while they were in Middle and High School. The church is a place where their family has grown through many transitions and has fond memories. From youth programs for our children, Vacation Bible School, to maintaining the Middleham lawn mowers (Mark), to Altar Guild (Lucy), the working years, and now semi-retirement for Mark. They have made many wonderful friends at the church and it is those friendships that they enjoy and keep them coming back.

Jackie Vos: Jackie began attending Middleham Chapel in 2010 and transferred her membership from St. James Episcopal Church, Indian Head a few years later. She currently is the Treasurer and has held this post since January 2016. She is also treasurer of the ECW and supports fund raising efforts, such as the annual Harvest Tea. Jackie is one of four volunteers in the parish office who produce bulletins and perform the administrative functions of the parish. What keeps Jackie at Middleham and St. Peter's Parish are the generous and loving folks that support the parish, and also the many outreach efforts that support the community such as parish health, food drops, backpack program, and help with SMILE.

Karen Wilson: Karen is a life-long Episcopalian and has been a member of Middleham and St. Peter's for about 17 years since she transferred her membership from St. Asaphs in Pennsylvania. Karen has served on the vestry off and on since 2004 and has been one of the Parish’s representatives to the Diocesan Convention for most years since 2012. Karen and Jim live in Lusby. What keeps her at Middleham and St. Peter's is the Episcopal faith and especially our parish family. Also, the connection with the people in our parish is extremely important to her.

Jim Yoe: Jim is a life-long Episcopalian. Jim has been Junior Warden for about 6 years. He and Dale transferred their membership to Middleham and St. Peter's from St. Timothy’s Church in Catonsville about 44 years ago. Their three children were raised in the church. Jim and Dale live in Solomons and attend the Middle Service most of the time. What keeps Jim at Middleham and St. Peter's is the “pay” and the people. It’s also always a new challenge to maintain buildings that date back over 350 years.